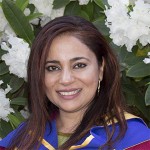 Hartej Gill was born in India in the state of Punjab. She is the daughter of Mohinder and Jiri Gill and the grand-daughter of Kishan & Naranjan Gill and Balwant & Pritam Sull who all come from a tradition of rice, sugarcane, date, wheat and vegetable farming in their respective villages of Fatehpur, Moranwali, Jindowal, and Palahi. Hartej’s education began at the Government Primary School in Moranwali in the District of Hoshiar Pur. She has since worked as an Elementary School Teacher in both the English and French Immersion Programs in the North Vancouver School District. She has also held the positions of an English as an Additional Language Teacher, French as a Additional Language Teacher, Learning Assistance Teacher and Teacher-Librarian. In her last role in the North Vancouver School District, she worked as a Vice-Principal at Sherwood Park Elementary School. She has recently joined the Educational Administration Faculty in the Department of Educational Studies.

Hartej is particularly interested in Social Justice and Leadership and in using research to bridge the gap between theory, practice, and social activism. At the core of her work is the goal of provoking critical dialogues about identity, power, systemic oppression. colonialism, patriarchy and modernity etc. From her professorship position designated by EADM as a scholar-practitioner, she hopes to use her praxis as way of co-creating transformative and reciprocal relationships between universities, public schools, and the larger community.

Gill, H., & Chalmers, G. (2002). Educating against racism through the arts: Programs of promise. A resource guide for educators and community groups in BC. Vancouver, BC: Settlement and Multicultural Branch, Ministry of Community, Aboriginal and Women’s Services, Government of British Columbia. 49 pages.

EADM-517 – “Supervision of Instruction”: July, 2006
Toward a Socially Just Relational Process of Supervision